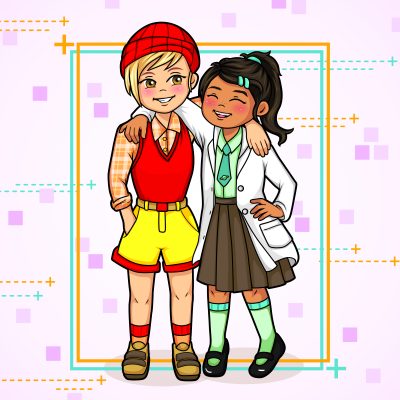 I arrived early because I was excited. It had been many months since I had been there.

I was thrilled, scared and it felt right. I was back in a theatre. This was a few Saturdays ago.

Then, seven 10-12 year old actors arrived – all masked, of course. Four adults sat at a table about 10 feet away from them – again all masked. Strict precautions were observed – everyone was masked, no touching, everyone sat at least 6 feet apart and no singing. We were about to have a reading of our new musical, MILEY CHASE THE SCIENCE ACE!

Initially, we designed the show to be performed by actors in grades 4-6, but as we did our first set of consultations with teachers, they advised us that the show can be done by both grade schools and middle schools. So, we are building the show for middle school actors then we can adjust it for younger actors.

I wrote the story, with a lot of help from Assistant Producer, Nicholas Reinhart. Dylan MarcAurele wrote the music and lyrics, and Mike Ross wrote the book. It is hysterical, clever, and poignant. Read the plot here.

And now we’ve moved beyond the reading. This week we went into the recording studio. Thanks to our outstanding tech genius, Tyler, the three singers were each isolated in separate rooms. Very safe… and very challenging! But it worked. We recorded four of the songs! You can listen to the music here.

Next, I’ll share some background as to how I created the story and characters – it is really fun.